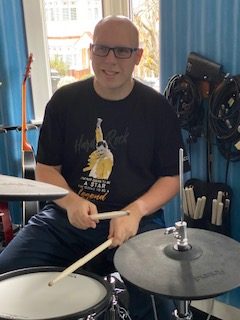 I found out about Face Front when I left the Orpheus Centre in Godstone, Surrey, in 2010.  The director of the Orpheus, Danny Braverman, knew Annie Smol and asked me to contact her as he knew she was running Face Front near where I lived in Enfield.  She invited me to join Face Front as a volunteer and I spent time helping out in the DDM sessions at Edmonton Green and also helped out with touring plays.

In February 2011 I was a volunteer drum tutor and I also helped out with vocal warm ups and even volunteered my disco services which everyone enjoyed.

I did some session planning and learned how to write my own session plans and also started to lead particular parts of a session.

After I met and worked with Greg Williams in Broken Silence and Inter-Action he asked me to get involved with drumming on some of the projects and later on, was called on to drum in many of the Face Front plays including:

Back in 2013 I recorded my first album, ‘When Words Fail’.  When Shirley Mason heard the album she was inspired to write a new play, ‘Collateral Insanity’. This told the story of my life and struggles and included all the songs from the album, plus a new song written especially for the show by my mother and me and a number of songs written by my sister.  The play was performed at the Dugdale in April and September 2015 and starred Greg Williams who played the part of Will Smith whilst I played drums and keyboards in the band.

With Greg’s help I am now writing my second album which is likely to be called ‘Music Speaks’ and which I hope may be finished in 2021/22.

At the moment I am starting to learn songs for the up and coming Face Front productions which were due to take place next year but have been interrupted by the current pandemic!