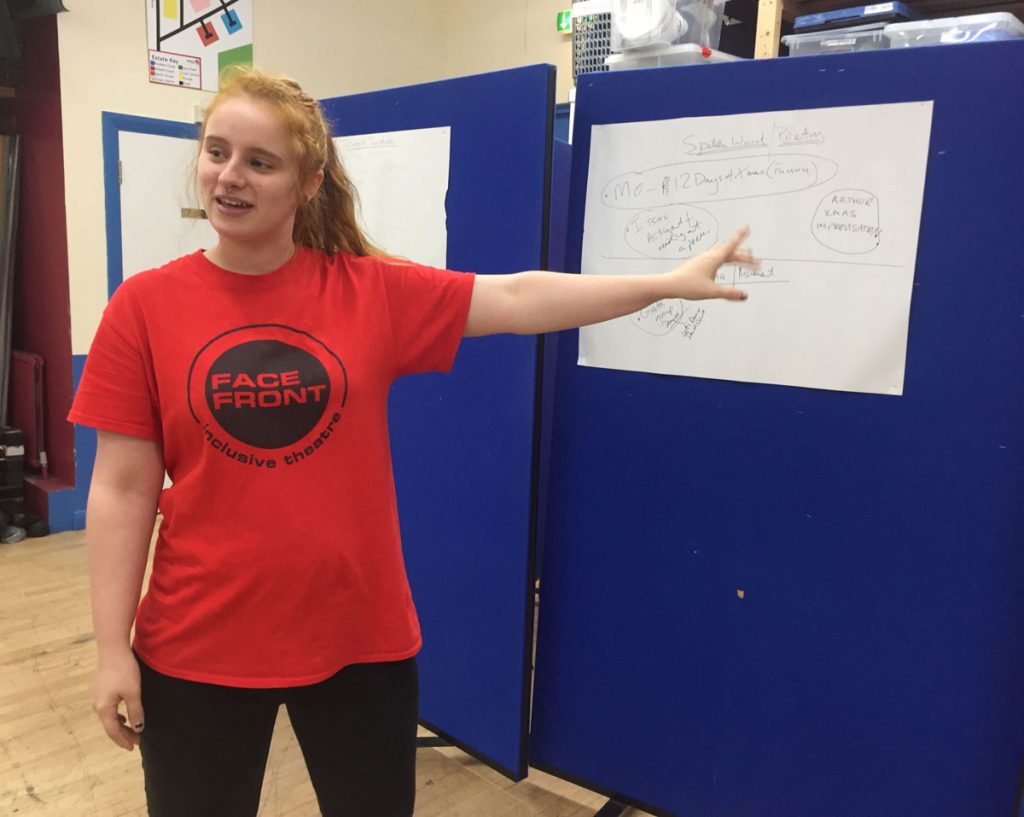 Can the arts truly make a difference?

Sometimes I question; how can the Arts truly make a difference in the outside world? No matter how simplistic. The world behind the walls of The Royal Central School of Speech And Drama is what I’m referring to and that question was answered for me quite dramatically by this innovative performance of ‘It’s My Move’ by Face Front Theatre Company at one of their performances that I witnessed.

Being the first time witnessing an inclusive performance for an audience of disabled young people,

I noticed a variety of needs and capabilities within the crowd. I found myself not only finding it very entertaining but also exceedingly informative for all watching, including me and even though it was for a specific audience, the play also held and gave advice for any young person looking to make their next move.

The story starts off with six friends at their school. We meet the characters as they start talking about what they want when they leave school, whilst getting the audience involved! You then begin to notice that even though some have decided on what their next move is – some of them haven’t – due to allowing themselves to be influenced by their parents and friends, as a lot of young people do, instead of using their own voices.

We learn this is due to a mix of not wanting to leave the comfortable environment they are used to, but also as quoted by an audience member, ‘not wanting to hurt anyone’s feelings’ which is yet another subject circling in today’s society. ‘It’s My Move’ show brings to light the problems that many young people will experience at least once in their lifetime, so already in the first scene we see the purpose of this piece.

Throughout the play, we see the journey that each character goes through after visiting a college, whilst using elements of song and Makaton. These elements, personally not only made the performance more fun and engaging, but also allow complete accessibility. When following individual characters, we see they are conflicted with what they want to do whilst also seeing where their challenges lie in the future.

Up until this point, the ‘It’s My Move’ characters appear to be successful in telling their stories. I sit there and think, what else could they do to ensure complete accomplishment within audience involvement – other than asking a few questions here and there? This is when they bring the element of playback theatre into the equation.

We re visit previous scenes where, the characters who are having trouble with what to do, come back and we then witness the scenes in which their problems potentially could be solved. The problem needs help from someone, that’s where the audience comes in. Together, cast and audience puts into action what has hopefully learned throughout watching `It’s My Move`.

At this point I saw how engaged the young people were! Hands went up and they were eager to take the roles of these characters and help, which to me showed how much they had learned. It also showed that, if they were then in a similar situation, they would know what to do or where to begin.

The actors then had a brief discussion with the audience as a ‘warm up’ before leaving it in their hands to solve the problems. This allowed the characters to see what the audience felt was the right thing to do when leaving their school. It was clear the audience was finally able to feel as though, ‘Yes, they can most definitely do it’- All they have to do is use their voices.