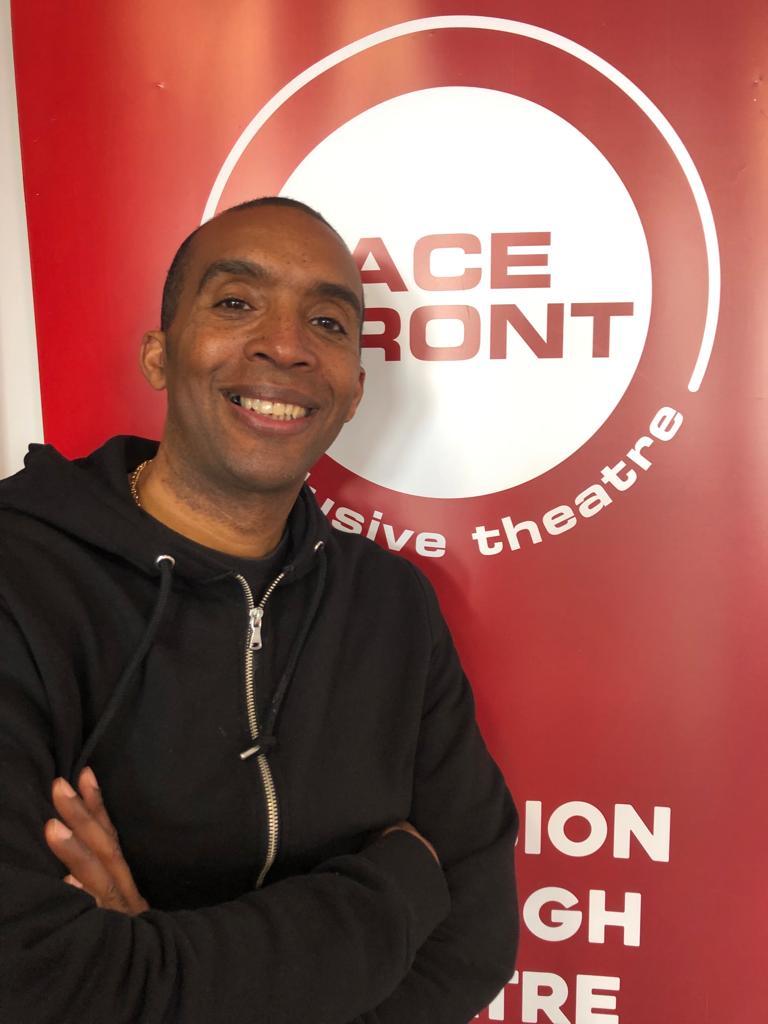 volunteering with the blue sky actors

This year Face Front Inclusive Theatre is seeking more volunteers to help support our life-changing theatre work. Julian recently volunteered front of house on a Blue Sky Actors production, here’s what he’s got to say about the experience…

My daughter Lauren was born with Downs Syndrome. I have always been positive, regarding her disability, learning difficulties, and needs. To that end, I have from a young age tried to get her involved in as many social, fun, and learning environments as I could. From mainstream nursery, school, college, ballet to street dance and beyond. So, to hear about a group of adults who mentor people with learning difficulties, to act and get involved in drama…it was a no-brainer.

The difficult thing with joining a group like Blue Sky (which on paper seemed to be yet another positive, fun, life-affirming experience for) WAS ACTUALLY getting in, based in our locality of Stratford I thought there would not be any issue getting a place, as there would not be many young adults, or indeed parent/carers who would be interested in joining a Saturday afternoon, acting and drama group in Newham, East London.

Blue Sky Actors was full of positive, wonderful individuals, not just the ‘special wonderful adults’ with varying needs but the enthusiastic, caring, friendly, and professionals who not only give them a chance to act, be someone else, but also socialise have so much fun and look after their needs. She nor we have looked back or ever regretted the decision to enroll…more than worth the wait.

Lauren has a group of social friends like no other, a second family in my eyes, with adults like Ray Downing who has the experience, talent, and a drive to help the men, and women achieve. Lauren like the others in the group has a great time each Saturday, at Stratford Circus, but they also learn from Ray and his group of staff and volunteers who are brilliant actors in their own right, but more than that, they care about ‘our kids’. They make them feel welcomed and INCLUDED.

Shows are tailored to the individual’s strength and they are stretched in a good way, Lauren has been attending for about 5 years now and has gained the confidence to act, and be someone else in this safe, fun environment; something many with disabilities yearns for, to be someone else and be accepted!

However, they are allowed and encouraged to be themselves, quirks and all, and it is actually incorporated into the performances that are put on during the year by Ray, and the team at Face Front.

Lauren as I say, made great friends, who hang out socialise, and have a giggle. There are no Divas or egos at Blue Sky Actors, Face Front has encouraged inclusiveness but also the professionalism the adults deserve and yearn for. Lauren like others has been given the confidence to travel independently to the sessions at Stratford Circus each Saturday. The ease of bus and rail links means we like others can allow our ‘vulnerable adults’ to travel, easily, without too much worry. That’s one of the reasons to remain at Stratford.

Lauren has become independent, having to learn a few lines between sessions and for shows, she is eager not to let the team down and make herself and us proud at the same time.

The team at Face front, despite Covid, continued to conduct sessions via Zoom, and put on virtual performances, which gave its actors hope and stability at a time, that it felt like these were in short supply and dwindling. Thank you, Ray and the team.

It was at this time that I thought it would be great to be involved. As a regular heckler, (fun heckler) at Pantos, and one of those who loves a bit of audience participation.

A DBS check is required to help out, in most cases, but you could do any of several tasks they might need at shows and events.

I was in no doubt that asking the team at Face Front if I could volunteer my services as whatever, they needed, (carer, helper, general dogsbody, runner)…as I said after my first volunteer role, (front of house for a performance in 2022) Who wouldn’t want to spend 3-4 hours with these lovely people. I have involved myself in protests over the closure of Stratford Circus as an arts and culture hub, and never thought I would be an activist or demonstrator, but this group and cause had to be stood up for.

I would highly recommend it if you are someone who likes to help, someone who wants to make a difference in others’ lives and be appreciated and have fun at the same time. Please join our team at Blue Sky, it felt like a family before, but now I feel like an important member of that family.

I look forward to giving more time and perhaps meeting some of you at some Face Front events.

(If after reading this you would like to volunteer with Face Front Inclusive Theatre please email hello@facefront.org)